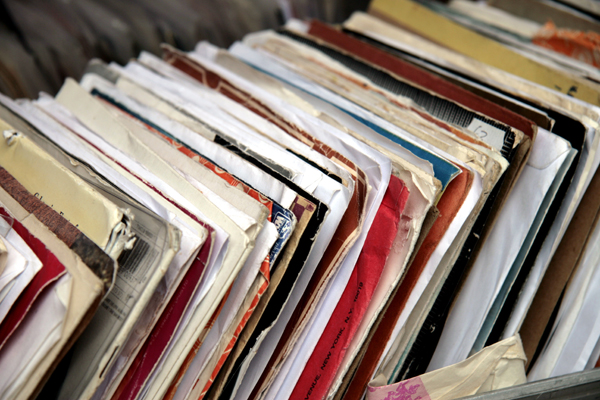 When I was a student at Berklee in the early ’80’s, there was no internet to discover new music on.  And while there was some great alternative commercial and college radio going on in Boston at the time, there was no easy way to get out across the globe and find new, non-local talent.  That is, there was no easy way, unless you were willing to roll the dice at the local record stores’ used discount bins.

There were dozens of used record stores around the city.  We were fortunate to have two surrounded by the Berklee campus.  Both of these stores had discount bins that mainly consisted of music nobody had heard of before, with the albums priced anywhere from 25 cents to a dollar apiece.  And because they were located in proximity to one of the largest concentrations of diverse musicians on the planet, the stores were smart enough to make sure these discount records really were the unknowns of the musical world.  It was possible to discover a desired artist amongst the piles, but it was rare.

Because this was a time in my life when my musical taste was expanding exponentially every day, I took a much different approach to the discount bins.  I would go in with $10 dollars in my pocket (big money for a college student) and head straight to the bargain section.  Once there, I would start going through the bins and pick out albums, basing the decision solely on the album art.  If it looked cool or interesting, I’d put it in my pile.  Usually, I could walk out of the store with 25-30 albums for my $10.  I’d run back to my apartment and start listening to them.  Like I said, I was rolling the dice.  Most of what I purchased was not up to my expectations. But just about every trip resulted in one or two gems, music that was incredible, went into the regular rotation pile and were the start of a new artist catalog in my collection.  It was worth the $10 to find those few albums each time.

Boy, how the times have changed.  I haven’t been in a record store in twenty years. My album collection has been replaced by a Groove Music account containing almost 2500 albums, most all of which would be categorized as classic music today.  And now that I am back in the hunt for new music, I turn to the modern day version of those discount bins- the internet.

Now, there are a couple of differences between the two.  Unlike the discount bins, I can actually listen to the music before purchasing, guaranteeing that I will enjoy everything I buy.  No more rolling of the dice.  Another difference is that an artist’s full catalog is usually available wherever I’m doing the buying.  No need to spend months (or years) looking for the missing pieces to complete the collection.  I may not be able to get an album for 25 cents, but I’m guaranteed that my $10 purchase is going to be music gold!

And yet, as much as they differ, they share one common trait.  You have to wade through the weeds to get to the good stuff.  This is what I experience.  There are days where I find one band after another that totally knock my socks off and have me grooving in my seat for hours at a time.  These are a rarity, especially the longer I explore, having found all of the easy gems, the low hanging fruit.  Most days, I may listen to 50 bands and only find interest in one or two of the groups.  I find myself flashing back to the old days, where al the hours of listening to those discount records resulted in just a few keepers.

Why am I telling this story?  I tell it because it demonstrates one of the biggest challenges in the indie music world, both for the listener and the artist.  There is a ton of music available to sift through, and the hard fact that most of us don’t talk about is that most of it is really not that good.  I don’t say that to be mean, I say it because it is reality.  There is a subset that is plain noise, a bunch of ex-college frat boys who bought guitars to get the girls, and never really learned how to play them, let alone how to sing.  Then there is a much larger group that I call the “not quite ready for primetime bunch.”  You hear talent, you hear the potential, but the sound isn’t quite there yet.  The mix is muddy, the balance is off, or any number of things that need improvement.  For the casual listener, the possibilities of the talent is not enough to pull the trigger, at least not yet.

This all presents a challenge for the average listener.  The sheer volume of music out there can overwhelm most folks. Factor in the large proportion of that music that is not good enough to justify the expense, and it is possible that they throw their hands up in frustration, give up the search and go back to commercial music. The problem is complicated if they have a narrow music preference.  If the are looking for nothing other than progressive rock, as an example, they may run out of steam long before they start finding the real gold.

For those artists that do stand out from the rest, these same issues exist.  They can easily get lost in the weeds, unrecognizable from all the other music out there.  It amazes me when I come across truly legendary music with next to no fan base at all.  And for those unpolished artists that haven’t quite figured out the sound yet, the lack of attention from the buying public can lead to frustration and, unfortunately, to these talents giving up the dream.  It sounds like an impossible problem to solve.  However, there is one more piece of the puzzle in this new musical world.

This is where the influencers come in.  They come in many shapes and sizes.  Good independent internet stations, who find the cream of the crop and put them in rotation.  A place where the casual listener can go to find great music.  Bloggers and reviewers who give honest feedback and develop a fan base of their own, a fan base that is hungry for good new music.  Hell, I’m even an influencer, in my own little way, throwing my support behind great musicians and getting the word out about them any way I can. In addition to that, I can also point listeners to the internet stations.  With all of this support, incredible music has the potential to gain the visibility it so richly deserves.  And those of us that have chosen to become the influencers have to realize the great responsibility we have in this universe, because we can be the difference between success and failure if we are not doing our homework, constantly looking for the next great sound.

The influencers have an additional responsibility as well.  We have a responsibility to that second tier of artists that aren’t quite there yet.  We have to encourage, while giving honest feedback to help them get over the hump.  We have to do this in a way that does not discourage, but rather helps the artist to grow.  To me, this is the toughest part of the job, but maybe the most important role, as it can result in the next generation of great music, if done correctly.

The point of all this is pretty simple.  We, as influencers, are the key to the treasure chest, both for the artists and the listeners.  We have the ability to connect one with the other.  We can make the snipe hunt of the discount bin a thing of the past, never to be seen again. We can grow our fan bases, but only to make music more visible, and not to stroke our own egos.  After all, it is ALL about the music.  Nothing else matters.