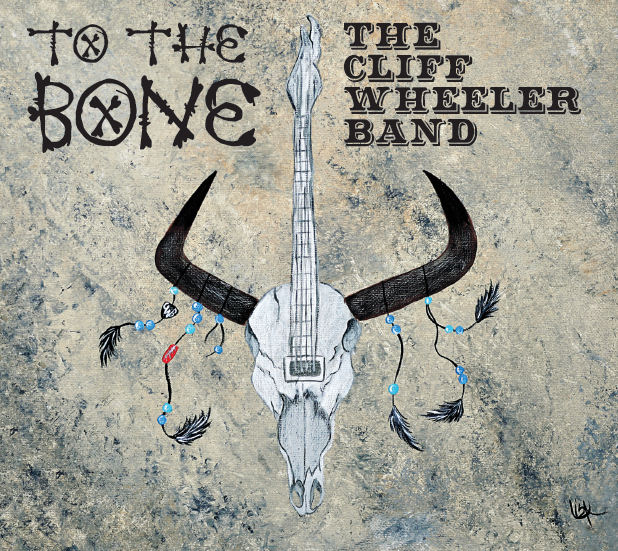 Yes, I know, it has been FOREVER since I’ve been in the right frame of mind to write an album review, and this is one I’ve been wanting to write for a few months now.  Hopefully, I haven’t lost my touch!

I believe everybody needs a little outlaw in their lives.  For me, it is binge-watching old episodes of “Sons of Anarchy”.  For you, it could be your favorite police show on television.  It could be the latest crime drama book you are reading.  Or, it could be that you’ve stumbled upon the sophomore release by The Cliff Wheeler Band, “To The Bone”. This album helps to define contemporary southern outlaw rock in a fun and interesting way and provides the listener with an infectious listening experience from beginning to end.

The Cliff Wheeler Band consists of a group of musicians that love playing together, which makes itself evident in their music.  Led by frontman/singer/songwriter/guitarist Cliff Wheeler, the band hails from Lemon Springs, NC and has become a regional favorite throughout the Carolinas.  Joining Cliff on the album are his son Garrett on bass, Kevin Humphries on drums and Gary Orlando on lead guitar.  The band’s first album, “Wheeler”, had a more traditional rock to feel to it and produced internet radio hits “Vicous Cycle”, “Judgement Day”, “Find My Way’ and my personal favorite “Long Time Gone”.  The chemistry of this group was evident in this debut album, with a solid musical foundation created between the work of Kevin on drums and Garrett on bass, and the great interactions between the two guitarists to complete this great rock sound.  Cliff and Gary have played together long enough to have formed a great chemistry and play off each other fantastically throughout both albums.  Adding the cherry to the top are the very real vocals of Cliff Wheeler, whose voice adds a very believable and essential raw edge to each song. Put them all together and you have one kickass band that requires the volume to be turned way up!

“To The Bone” is a stylistic departure from their debut release.  Cliff and the band started experimenting with a new sound that draws influence from the great outlaw country and southern rock of generations past while adding a modern twist to make the music unique to the band.  The fear with changing the sound of a band in this manner is that the new product does not live up to expectations.  No such fears exist with “To The Bone”.  In fact, it is as if the band found its true voice in the outlaw world.

The album is filled with a great variety of songs that make listening to the entire album an almost automatic action for the listener.  Every song tells a story. Some happy, some not so much.  From some of the fun songs on the album, like the infectious “Son of a Son” (you can hear Cliff’s dad speaking in the audio before the song starts) and the musical response to an unappreciative crowd in “Ode to a Hater”, to the more serious songs about the struggles of life (“This Old Hat” and “Hard Living Man”), the band perfectly portrays the real emotion needed to make each of the songs believable.  Of course, none of it would work without great songwriting, and Cliff Wheeler provides the kind of storytelling that allows for some personal introspection and a greater appreciation for life.

Musically, the album flows effortlessly from song to song, and the high level of musicianship shines through to enhance the overall listening experience.  The production quality is worthy to note and provides a finely blended band.  The challenge with producing music that requires a raw feel is finding the sweet spot.  Make it too raw, it sounds like it was recorded in a basement.  Polish it too much and you lose the edge that makes the music work.  The mastering of this album successfully walks that tightrope.  From the very first listen, I found myself digging into the mix and breaking it down to its individual elements, each of which worked perfectly in every song.

The best measure of a two-guitar band is the ability of the two instruments to blend together while each defining its own space and distinctive sound in the overall mix.  Cliff provides solid rhythm guitar mixed with creative leads, while Gary Orlando continues to prove why he is one of the most technically proficient and tasteful lead guitarists in the game today.  His use of throwback techniques and sounds fill the arrangements out in a way that completes them.  One listen to his leads on the album will have you falling in love with his style!

If you’re looking for music with a pop feel, you’ll have to wait for another review (maybe more than one).  If you’re a fan of Culture Club (do fans of Culture Club still exist?), this probably won’t be your cup of tea.  However, if you’re looking for the kind of rock music that makes you throw the car windows down and throw the volume up, “To The Bone” is the perfect addition to your collection.

I categorize this as one of the must-have albums of 2018.  You will not be disappointed.

You can purchase “To the Bone” and learn more about The Cliff Wheeler Band on their website, http://www.cliffwheeler.us/.