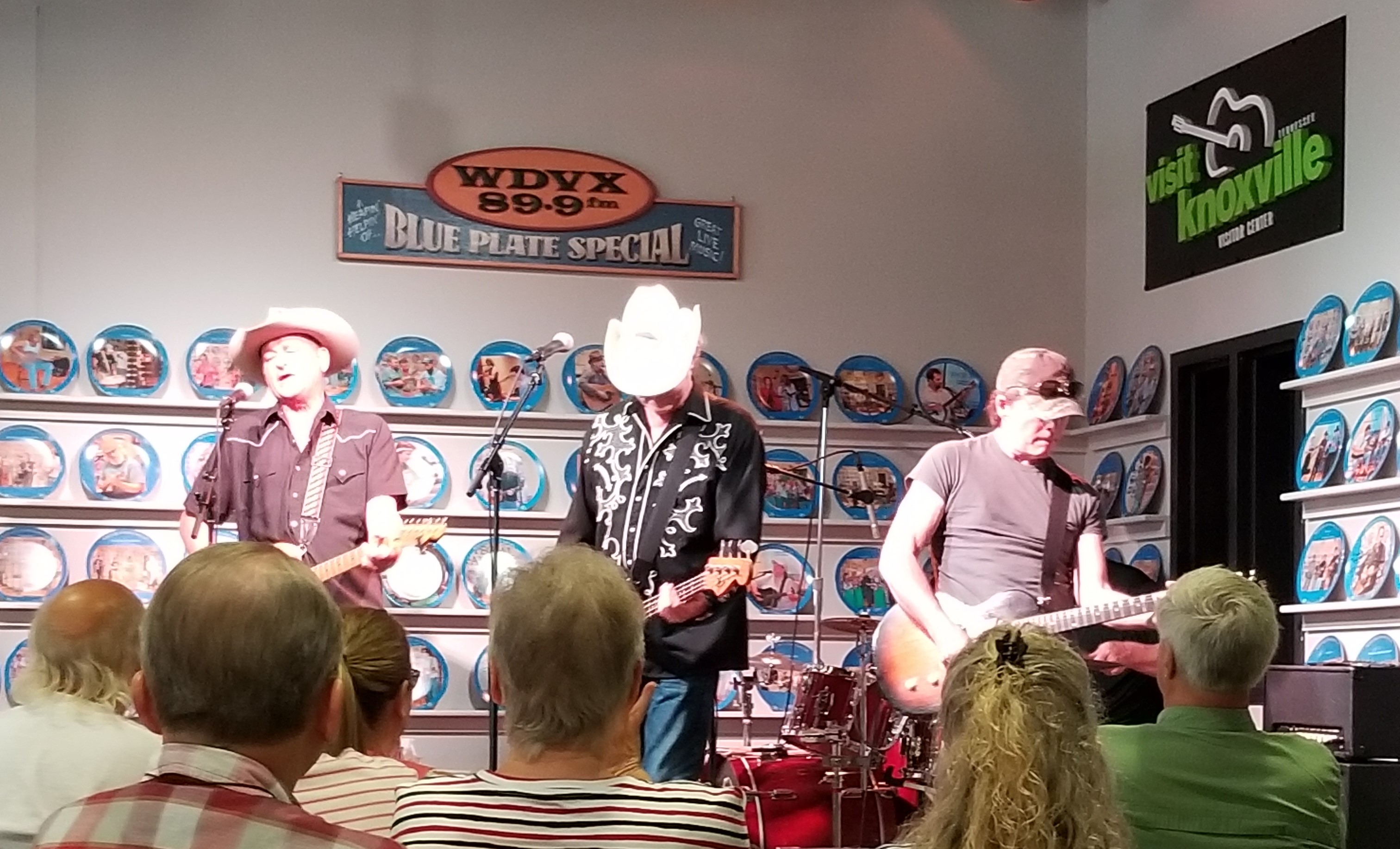 Living in Colorado Springs, I don’t have many chances to catch a truly hot show, without dealing with the hassle of traveling in and out of Denver (which sucks) and the extremely late arrival time home when coming down from Denver (I need all the beauty sleep I can get).  It took a recent trip to Nashville and an accompanying road trip to Knoxville, TN to finally catch one of indie music’s truly hot acts- Saint Luke’s Drifters.  SLD recently played a set for the WDVX Blue Plate Special, and we were lucky enough to catch some incredible music live.

For those not familiar, Saint Luke’s Drifters is an eclectic collection of Tennessee area musicians, covering a wide variety of country and rock backgrounds.  Guitarist and vocalist Kenny Clark, bassist and vocalist Mitch Laney, drummer and vocalist Scott Kirk, and guitarist Johnny Beemiller bring a ton of musical experience and talent to the table. Despite their differences in backgrounds and playing styles, the band comes together perfectly to create an outlaw rock sound that even the legendary masters of rock would kill for.   Their grass roots Americana sound is one full of energy and passion, and their 2016 release, “Trials and Tribulations”, perfectly captures the personality of this band.  Recently named 2016 Artist of the Year by Music Mafia Radio, SLD has a reputation for putting on a killer live show.  They did not disappoint.

The WDVX Blue Plate Special is a weekly show showcasing regional and national independent talent.  Hosted in the Knoxville Visitor’s Center, it is a small and intimate venue, not the type of place you would expect to find a band known for its habit of turning up the volume.  However, the band did an incredible job of controlling the volume without sacrificing their overall sound, filling the room with great music without blowing the windows out of the place.  Playing multiple selections off their current album, including “Long Weekend”, “Battle of Wounded Knee” and “Heart of Stone”, they had the entire crowd rocking in their seats (and me singing along on more than one occasion).

With indie music, my biggest fear is always that the tricks and techniques used to record an album can’t be recreated in a live environment, leaving the listener with a stripped down version of their favorite songs when seeing a group in person.  My fears quickly dissipated within minutes of them taking the stage.  I was greeted with a mix and a full, rich sound that actually put the album to shame. The vocals were crisp, with full, in tune harmonies (extremely important to me), and the instrumentals were crisp, with each instrument easily heard in it’s own space.  Screaming guitar solos from both Kenny and Johnny were spot on and added a whole new level of greatness to the performance.  In essence, I was presented with a live product that very few well known acts would be able to reproduce in a similar environment.  Most importantly, the fun the band was obviously having on stage quickly consumed the audience.  Their energy on stage is infectious, and it quickly filled the room.  They left us longing for even more.

If you ever get the chance, I highly recommend Saint Luke’s Drifters as “must see music”.  I promise you won’t be disappointed.

Saint Luke’s Drifters latest album, “Trials and Tribulations”, is available on Spotify, Reverbnation, iTunes, as well as many other online music retailers.

To learn more about Saint Luke’s Drifters, visit their website at http://www.saintlukesdrifters.com.